Average utility is the satisfactory per unit consumed on average. Marginal utility is the incremental satisfaction brought about consuming an extra unit of a commodity. All this is assessed two schools thought

The Law of Diminishing Marginal Utility (DMU)
This law states that holding other factors constant as more and more units of a product are consumed one after another the marginal utility falls as the total consumption increases..

Application of the law

N/B The law applies in many practical situations. For example a person on an exotic holiday to the Maasai Mara will experience increasing in total utility as his holiday proceeds but he is likely to derive greater satisfaction during the earlier days of his holiday than during the late days.

The law of diminishing utility applies provided other factors affecting the consumer’s level utility, apart from the quantity consumed, remain constant. If any of these factors such as taste of fashion change, the law may be temporarily inapplicable until a stable situation is re-established. For example a person may progress from an occasional buyer of paintings into an obsessive collector or art. 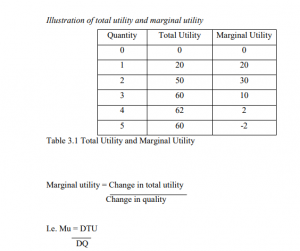 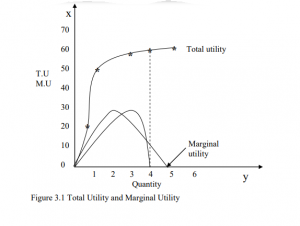 The Limitation of Utility (Cardinal Utility)
1) It is difficult to make inter-personal comparison of utility since satisfaction is subjective
2) Measurement of utility is difficult since utility is a mental phenomenon even the help of any instrument hence difficult to determine equilibrium position of a customer.
3) It dose not consider other factors that determine utility such as environment
4) Indivisibility of commodities is not possible to divide some goods into small units in order to equalize marginal utility
5) Ignorance of individual who are some times not aware of the substitute or different goods, e.g. cheap substitute leading items to have low satisfaction from the commodity they consume.
6) Different behaviour of individual due to different customs and fashion