Co-operatives are legally registered bodies, in many countries there is a Co-operative Act governed the National Registrar of Co-operatives, or similar, or they are under the guidance of the government’s business registration body.

How Co-operatives are managed
Management structures vary depending on the size of the co-operative: below is a generic diagram for a small to medium sized co-operative using an organisational structure that can be found across Europe, Africa, Asia, the South Pacific and the Caribbean; and to a lesser extent the Americas. In many countries enterprise size is defined as:
Micro: 0 to 5 employees
Small: 6 to 10 employees
Medium: 11 to 50 employees
Large: 51+ employees 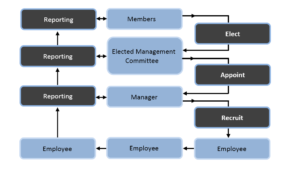