This refers to the market structure dominates large few firms. The number of sellers (firms) is small enough for other sellers to take account of each other i.e. if one seller changes his prices or uses non- price strategies his/her rivals would react. This is called oligopolistic dependency.

1. Contains few firms who produce goods that are substitute but need to be perfect substitutes.
2 Lies somewhere between extreme of perfect competition are monopoly.
3 There are barriers to the entry.
4 Decision of the firms are strictly interdependent
5 Sellers agrees on the price or the market share

Kinked Demand Curve
The interdependence in oligopolistic firms explains the price rigidity among the firms. The theory of kinked demanded curve suggests that firms in oligopoly face two sets of demand curves.

For price increases the firm is an elastic demand curve dd. For price decreases it is on the inelastic demand curve DD. This means the actual demand curve for firms is represented dED. The demand is said to have a kink at point E associated with the price P1 and quantity Q1. All firms in the industry are assumed to be in a similar position which implies that if a firm raises its prices and its competitor fails to follow suits then, it will loss large sales of revenue.

This firms is on the elastic portion of the demand curve If one firm reduces prices then, its competitors will have to reduce their price at least a much or even more to retain the market share. When the price is lower each firm has the same market share which implies that the firms are on the inelastic portion of the demand curve. Collusion will take the form of agreeing the prices for each market share. This is done in order for the oligopolistic firms to maximize their joint profits and reduce uncertainty. A form of open collision is known as a cartel wherefirms produce differently but act like determinants of price and output. Figure 5.8 shows the Equilibrium of an oligopolistic firm facing kinked demand curve. 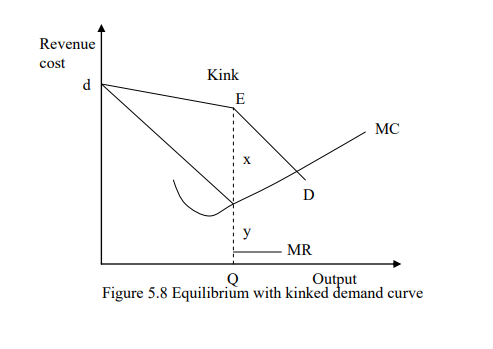