1 There are many buyers and sellers in the market
2 The product of the sellers is differential yet very close substitute for each other
3 There is freedom of entry and exist of firms
4 The goal of the firms is profit maximization both in the short run and in the long run.
5 The prices of factors of production and technology are given. Under this competition, each producer sells a product which is to slightly different from that of the competitor and attempts to emphasize on differences like packaging and advertisements.

This process of creating the differences is called product differentiation which is aimed at creating brand loyalty. The firm demand curve will be relatively elastic since the products sold the competition will be relatively close substitutes. Monopolistic firm sells differentiated products therefore have limited control over the price. They are prices makers since they can raise their prices without loosing their customers and have to reduce the prices in order to sell more Short run equilibrium in monopolistic competition 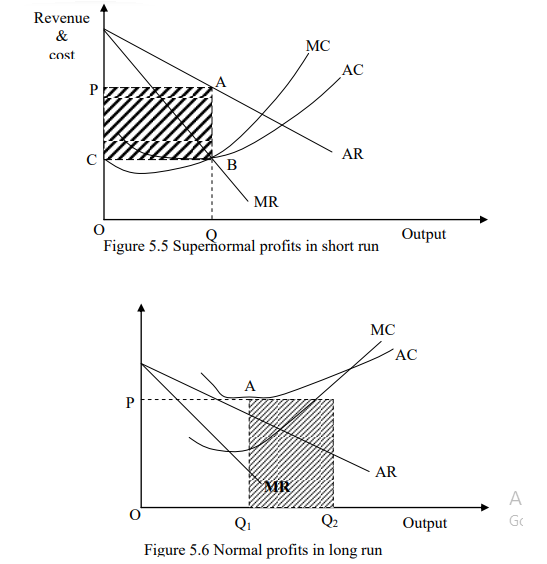 A firm in monopolistic competition in the long run will make normal profit since average revenue will be equal to average cost. The existence of many brands enhances the consumer choice and ability. However it is considered wasteful because of existence of excess capacity shown (Q2-Q1) which is carried (borne) the consumer through prices. It is also in wasteful since the resources that could have been used in expansions and exploitation of economies of scale are used in advertising.