Maseno University has been shut down indefinitely following students unrest over increased insecurity in and around the institution .

The Vice-Chancellor, Prof Julius Nyabundi on Sunday said that the riots were over alleged rape cases in campus students’ residences. In a memo to all students, he said the University Senate met on December 1 at 7pm and reached the decision after they were not properly engaged over the matter.“Following unrest students over alleged rape cases reported to have occurred in and off-campus students’ residences, and failure the students to engage university management on structured discussions on the same; the Senate resolved to close the university with immediate effect until further notice,” Prof Nyabundi said.He ordered that the students vacated the university premises 7.30pm. A student leader at the university told us that two of their female colleagues were raped on Saturday night, adding to the numerous cases already reported at the school. He said the incident happened when a gang broke into a house, raped two girls and beat the third who resisted their order.

He added that the security of the students residing outside campus was wanting.The students took to social media under the Hashtag #Masenolivesmatter to call the authorities’ attention to the rising cases of insecurity, theft and violence they were facing. 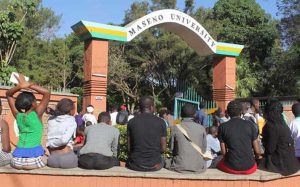