In the long run all factors of production can be varied and thus the firm will chose the input combination which optimize output and at the same time minimize their cost. This is illustrated the use isoquant and isocost. Isoquant shows all the difference combination of labour and capital with which a firm can produce a specific quantity of output.

Assumption of Isoquant
1) There are only two factors of production i.e. labour and capital
2) It is possible to substitute labour for capital and vise versa continuously in the production process

Isocost shows all different combination of labour and capital that a firm can purchase given the total outlay (ability) of the firm and factor prices.

Assumptions
1) The firm takes the input prices as given the market
2) There are two inputs; there are the labour and the capital. 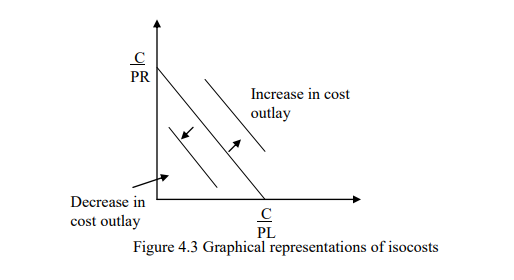 The slope of an isocost line is given ∆Pk
∆PL
If the firm spends all the total outlay on capital then he will purchase C units of capital
PK
If the spends all the outlay in labour then would purchase C
PL
By going the two points we get the is cost of the firm and therefore the total cost for utilizing labour and capital will be given by
C = WL+rK Where w- price for labour; r- Price for capital

Optimal Input Utilization
For a firm to minimize the cost of production which is the optimal input utilization point, it must do so t hat the point where the
isoquant is a tangent to the isocost line are shown in Figure 4.4 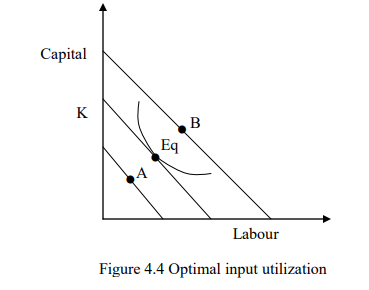 At point A there will be under production since the resource are not maximally utilized.
At point Eq the firm achieves the optimum input utilization.
At point B the firm is unable to produce since the resources are limited at the point Eq.
The Marginal Rate of Substitution (MRTS)
The slope of an isoquant measures the rate at which labour can be substituted for capital keeping the output constant.
The MRTS refers to the slope of the isoquant
The MRTS of labour for capital refers to the amount of capital that a firm can give up one unit and still remain on the same isoquant

Expansion Path
In the long run all the factors of production can be varied and thus there is no limitation to the firms‟ expansion on its output. The objective of the is to choose the optimal way of expanding its output so as to minimize its cost and maximize the output within a given factor prices and given the production function, the optimal expansion path is determined the point of tangency of successive isocost line sand successive isoquant curves as shown in Figure 4.5 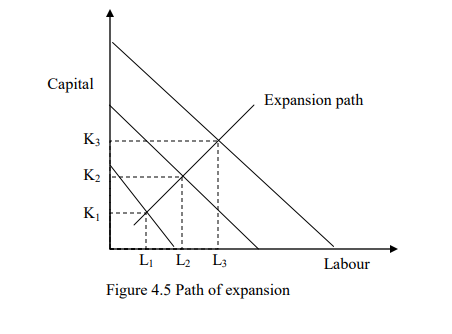