In general the procedure outlined in regard to debtors is also applicable in the case of loans (and advances). Apart from verification of the balances of loans, the auditor should inspect loan agreements and acknowledgements of parties in respect of outstanding loans. A loan or an advance, if material, can be granted only if authorised the Memorandum and Articles of Association in the case of company. In addition, he should confirm that the loans advanced were within the competence of persons who had advanced the same, directors in the case of a company, partners in the case of a firm and trustees in the case of a trust. It should be verified that the loan has been acknowledged the debtor and, in addition, he has executed a Pronote or a Bill of Exchange. If any security is deposited against due repayment of the loan, the same should be inspected. The loan should be classified for purposes of Balance Sheet in the same way as other debts. In addition, advances and loans to partnership firms in which the company or any of its subsidiaries is a partner, should be disclosed. Section 227(1A) specifically requires an auditor to inquire among other things whether :

The Research Committee of the Institute of Chartered Accountants of India has given guidance for making inquiry as regards the above two matters. The guidance is on the following lines. The matter under clause (i) applies to loans and advances made the company during the financial year under audit, whether they are outstanding on the date of the Balance Sheet or not. The inquiry should be made in the light of conditions prevailing when the loan or advance was made. Loans and advances have not been defined anywhere in the Act. However, having regard to the requirement of clause (ii) above a distinction is obviously intended to be made between ‘loans and advances’ and ‘deposits’. A deposit may be defined as the placing of money or money’s worth with a third party, either for safe keeping or way of security for the performance, of the depositor’s obligations, or for the purpose of earning interest; in the last case the depositing with a party who customarily accepts deposits. Items required to be disclosed under the head ‘Loans and Advances’ in Part I of Schedule VI to the Act which do not fall within the above definition of a ‘deposit’ should be construed for the purpose of the clause (i) as “loans and advances.” Clause (i) applies to all loans and advances made ‘on the basis of security’ for this purpose would include any movable or immovable property, whether belonging to the borrower or not, of which either physical possession or over which a legally effective charge is given to the lender. In order to ascertain that loans and advances are “properly secured,” auditors should make inquiries to ascertain that prima facie :

In order to comply with the requirements of paragraph 1 above, it will be necessary for the auditor to make appropriate inquires depending upon the type of security. A few instances are given below. 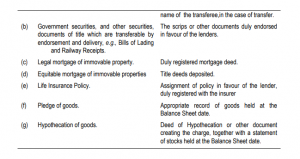 The valuation of securities which are quoted on a Stock Exchange would not normally present any problem. For securities which are not so quoted, the auditor should call for the last accounts of the company whose shares or debentures are deposited as securities and satisfy himself that prima facie the valuation placed on the securities or immovable property the management is reasonable. In the case of life insurance policies, the auditor shall call for evidence of the surrender value of the policy. In the case of stocks and other goods held on pledge or hypothecation, the auditor should ascertain that prima facie the valuation placed upon the goods is in order. The loan agreement or correspondence in regard to the terms of the loan or advance should be seen. Where the loan or advance is made to a company, any charge on the assets of such a company should have been registered under section 125 of the Act in order to constitute an effective security. Loans and advances on the basis of security would include loans or advances which are only partly secured from the commencement, or loans or advances which become partly secured owing to any reason, such as a fall in the value of the security. In the case of partly secured loans or advances, it would be advisable to show separately in the Balance Sheet as “Partly secured” including the extent to which they are secured. The terms on which the loan or advance is made would primarly include the security, the interest charged and the terms of payment. It would be difficult to lay down any general principles regarding the rate of interest which may be charged on loans and advances. Various considerations such as the position and standing of the borrower, type of security, purpose of the loan, prevailing market rate of interest, etc. would be taken into account. If the loan has been given for business considerations, e.g., loans to staff for purchase of cars, house, etc. loans to suppliers of raw materials or other goods there may be justification for interest being charged at a rate lower than the market rate or even, in appropriate circumstances, no interest being charged at all. However, when a loan is given only with a view to earning interest, the interest charged should be at the commercial rate. Particular attention should be paid to loans or advances to concerns in which the directors of the company are interested. The question whether the terms on which a loan or advance has been given are “prejudical to the interests of the company or its members” is a difficult one. Obviously, the auditor is not to inquire as to how such transactions of the company affect the interest of individual members (in their personal capacities). The reference to “members” should, therefore, be construed as a reference to the members of the company as a class, in their capacity as members. The members of company would be primarily interested in the reasonable return of their investment and the safety of their capital. The question whether a loan is prejudicial to the interest of the members should, therefore, be considered from this angle.

If a loan or advance has been approved the members of the company and/or the Government as required section 370 of the Act, this would be prima facie evidence to show that is not prejudicial to the interest of the company or members. It would appear that, in respect of a continuing loan or advance, the question whether the loan or advance is ‘properly secured’ would have to be considered at the end of each accounting year. However, the question whether a loan is “prejudicial to the interests of the company or its members” would have to be considered only at the time when the loan is given or renewed. It should be noted that an inquiry has to be made as to whether loans and advances have been shown as deposits and not vice versa. It should be noted that a public company cannot grant loans to directors without the sanction of the Central Government unless the ordinary business of the company is that of making loans and advances.