Education Cabinet Secretary George Magoha has commended the efforts put in ensuring the credibility of the 2019 Kenya Certificate of Secondary Education (KCSE) examinations.

The CS said teachers and security officers had done a commendable job in manning and ensuring that the exams which ended yesterday did not leak.Students who sat the Arts and design examination yesterday completed the 18-days exercise.“Our teachers have done a fantastic job. There were no witnessed cheating cases in terms of early exam leakages whatsoever,” Magoha said yesterday.

Prof. Magoha said his ministry had earlier identified a number of schools that were prone to irregularities from past cases and were watchful of them.

“We had placed about 300 schools on our radar but we only had problems with 21 examination centers. Two in Kisii were a little serious and the culprits went further to reproduce albums to impersonate the candidates,” he said.He highlighted that there were cases where police officers were nabbed receiving bribes to facilitate exam cheating.The CS noted that the ministry would immediately embark on the marking process which he promised would be fair and free from irregularities.He said the results of the exams will be released before the Christmas festivities.“Now that the examinations are complete, we intend to go to the marking process immediately. We have a multi-agency team that will oversee the credibility of the process,” said Prof. Magoha. 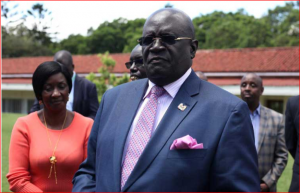