Demand refers to the quantity of a commodity that consumers are willing and able to purchase at any given price over a given period of time. It is important to realize that demand is not the same thing as want, need or desire. Only when want is supported the ability and willingness to pay the price does it become an effective demand and have an influence on the market price. Hence demand in economics means effective demand. It is different from desire in that it has to be supported the ability to purchase the product/service.

The price of a commodity is most important factor/determinant of demand. All factors affecting demand other than the price are referred to as conditions for demand. While analyzing the relationship between price and quantity of demand economists assume that all factors affecting demand remain constant. An individual demand for a given good can be presented in a form of a demand schedule. A demand schedule is a table showing quantity of a commodity that could be purchased at various prices. The Table 2.1 shows an individuals demand for commodity X. 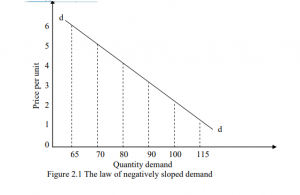 This law states that, “ceteris paribus (other things remaining constant), the lower the price of a commodity the greater the quantity demanded the individual and vice versa”.

Exceptions to the Law of Demand
There are some demand curves that slopes upwards from left to right showing that as the prices of a product rise more is demanded and vice versa. This type of demand curve is known as regressive, exceptional or abnormal demand curve and occurs in the following situations:

Goods of ostentation (Veblen goods). These are commodities whose prices falls in the upper price ranges and that have a snob appeal. The wealthy are usually concerned about status. Believing that only goods at high prices are worth buying and worth the effect of distinguishing them from other consumers. In the case of such commodities, a firm increasing its prices may find that the sales of its product increase and at lower prices less of the commodity may be bought as the commodity is rejected as being substandard.
Consumers often in making comparisons between similar products with different prices opt for relatively more expensive product believing it to be better. As prices increase demand increases this is referred to as sonob effect. Examples of goods of ostentation are expensive perfume, jewellery, cars clothes, etc. The demand curve will be positively slopping as indicated in Figure 2.2. 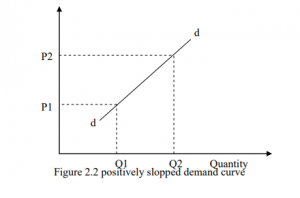 The Determinants of Demand

Conversely a rise in the price of a product will probably result in a fall in demand, as the amount of utility received is less likely to be worth the higher price to be paid. An example of this phenomenon is the hotel industry in Kenya. There is usually an increase in domestic tourism during the low season when many Kenyans consider the lower hotel prices to be worth the level of satisfaction they are receiving. During the high season when the hotel prices are high, many do not consider the satisfaction they are receiving to be worth.

The prices of related goods. The demand for all goods is interrelated in that they are competing for consumer‟s limited income. Two peculiar interrelationships can be; Substitutes goods such as tea and coffee butter and margarine, beef and mutton, a bus ride and a matatu ride, a mango and an orange, CDs and cassettes. Two goods, X and Y are said to be substitutes if a rise in the price of one commodity, say Y, leads to a rise in the demand of the other commodity X. If the price of tea increases consumers will find coffee relatively cheaper to tea as a result demand for coffee increases. Substitutes are commodities that can be used in place of other goods. This phenomenon is illustrated in Figure 2.3. The graph shows the relationship between the prices of tea over the quantity for coffee. If the price of tea increases from P1 to P2 the quantity of coffee demanded increases from Q1 to Q2. 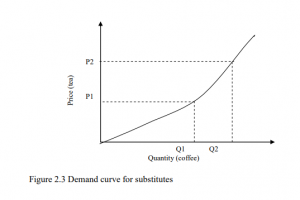 Compliments goods such as shoe and polish, pen and ink cars and petrol, computers and software, bread and margarine, hamburgers and chips, tapes and tape recorders. Demand for some commodities can also be affected changes in the prices of the complementary.

if a rise in the price of one of the goods, say A leads to the fall in the demand of another food, say B. Complimentary goods are usually jointly demanded in the sense that the use of one requires or is enhanced the use of the other. Figure 2.4 illustrates the relationship between complementary goods graphically. For example if the price of cars is lowered demand for petrol increases because more cars will be bought/demanded. The curve shows the relationship between the price and of a car and quantity demanded for petrol. If the price of cars falls from P2 to P1 the quantity demanded for petrol increases from Q1 to Q2.

Changes in disposal real income. An individual’s level of income has an important effect on the level of demand for most products. If income increases demand for the better quality goods and services increases. This relationship however, depends on the type of goods and level of consumers‟ income. The three types of are goods; Normal gods these are goods whose demand increases as income increases. The demand for normal goods increases continuously with increase in income. It tends to become gently as people reach the desired level of satisfaction. 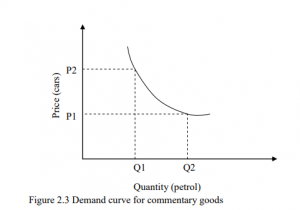 Inferior goods refer to goods for consumers with low income levels such that as income increases its demand falls. At low level of income, these individuals will tend to consume large amount of these goods but as income increases they buy other goods which they consider superior thus demanding less of the inferior goods. At very low level of income an inferior good behave like a normal good only to behave inferior as income increases. Necessities these are goods which consumers cannot do without such as salt, match boxes among others. Their income demand curve tends to remain constant other than at the lowest levels of income as indicated in Figure 2.5 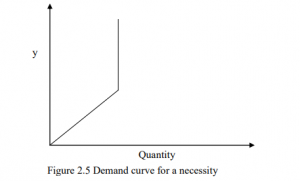 Changes in consumer tastes, preferences and fashion Personal tastes play an important role in governing the consumer’s demand for certain goods. For example, preferring to consume imported commodities despite them being extremely expensive. Prevailing fashions are an important determinant of tastes. The demand for clothing for example, particularly is susceptible to changes in fashion.

Level of advertising is also an important determinant of demand. In highly competitive markets, a successful advertising campaign will increase the demand of a particular product while at the same time decreasing the demand for competing products. Increase in advertising will increase demand in the following ways;

The availability of credit consumers. This factor especially affects the demand for durable consumer goods which are often purchased on credit. For example a decrease in availability of credit or the introduction of more stringent credit terms is likely to lead to a reduction in the demand of some durable consumer goods. The government policy The government may influence the demand of a given commodity through legislation. For example making it mandatory for everyone to wear seatbelts. The consumers inevitably get to purchase more seatbelts as a result.

Subsidies it’s the opposite of taxation. When the government grants subsidies prices of goods falls leading to increase in demand and vice versa. Climate change demand of various goods varies depending on weather. For instance there is high demand for woolen clothes during rainy reasons 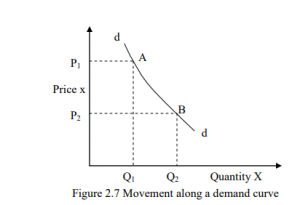 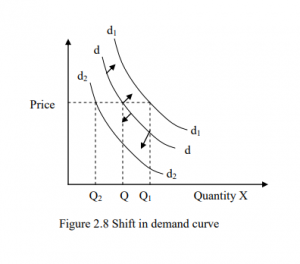