1. Classification on the Basis of Time
(a) Historical Costs: These costs are ascertained after they are incurred. Such costs are available
only when the production of a particular thing has already been done. They are objective in nature
and can be verified with reference to actual operations.
(b) Pre-determined Costs: These costs are calculated before they are incurred on the basis of a
specification of all factors affecting cost. Such costs may be:
(i) Estimated costs: Costs are estimated before goods are produced; these are naturally less
accurate than standards.
(ii) Standard costs: This is a particular concept and technique. This method involves:
(a) setting up predetermined standards for each element of cost and each product;
(b) comparison of actual with standard to find variation;
(c) pin-pointing the causes of such variances and taking remedial action.
Obviously, standard costs, though pre-determined, are arrived with much greater care than estimated costs.

2. By Nature or Elements
There are three broad elements of costs:
(1) Material: The substance from which the product is made is known as material. It can be direct as
well as indirect.
Direct material: It refers to those materials which become a major part of the finished product and
can be easily traceable to the units. Direct materials include:
(i) All materials specifically purchased for a particular job/process.
(ii) All material acquired and latter requisitioned from stores.
(iii) Components purchased or produced.
(iv) Primary packing materials.
(v) Material passing from one process to another.
Indirect material: All material which is used for purposes ancillary to production and which can be
conveniently assigned to specific physical units is termed as indirect materials. Examples, oil,
grease, consumable stores, printing and stationary material etc.
(2) Labour: Labour cost can be classified into direct labour and indirect labour.
Direct labour: It is defined as the wages paid to workers who are engaged in the production process
whose time can be conveniently and economically traceable to units of products. For example, wages
paid to compositors in a printing press, to workers in the foundry in cast iron works etc.
Indirect labour: Labour employed for the purpose of carrying tasks incidental to goods or services
provided, is indirect labour. It cannot be practically traced to specific units of output. Examples,
wages of store-keepers, foreman, time-keepers, supervisors, inspectors etc.

(3) Expenses: Expenses may be direct or indirect.
Direct expenses: These expenses are incurred on a specific cost unit and identifiable with the cost
unit. Examples are cost of special layout, design or drawings, hiring of a particular tool or equipment
for a job; fees paid to consultants in connection with a job etc.
Indirect expenses: These are expenses which cannot be directly, conveniently and wholly
allocated to cost centre or cost units. Examples are rent, rates and taxes, insurance, power, lighting
and heating, depreciation etc.
It is to be noted that the term overheads has a wider meaning than the term indirect expenses. Overheads
include the cost of indirect material, indirect labour and indirect expenses. overheads may be classified as
(a) production or manufacturing overheads, (b) administration overheads, (c) selling overheads, and (d)
distribution overheads. 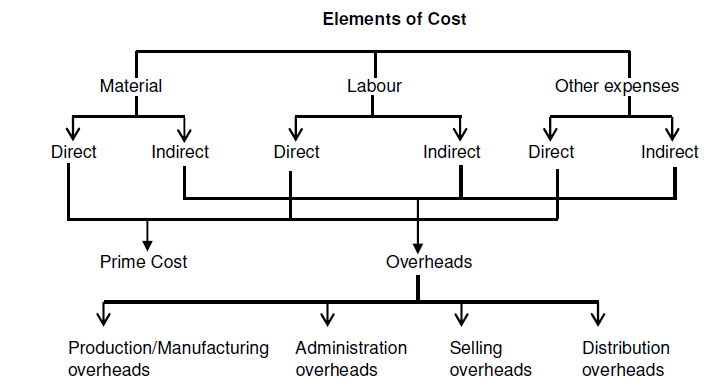 3. By Degree of Traceability to the Products
Cost can be distinguished as direct and indirect.
Direct Costs: The direct costs are those which can be easily traceable to a product or costing unit or cost
center or some specific activity, e.g. cost of wood for making furniture. It is also called traceable cost.
Indirect Costs : The indirect costs are difficult to trace to a single product or it is uneconomic to do so. They
are common to several products, e.g. salary of a factory manager. It is also called common costs.
Costs may be direct or indirect with respect to a particular division or department. For example, all the costs
incurred in the Power House are indirect as far as the main product is concerned but as regards the Power
House itself, the fuel cost or supervisory salaries are direct. It is necessary to know the purpose for which
cost is being ascertained and whether it is being associated with a product, department or some activity.
Direct cost can be allocated directly to costing unit or cost center. Whereas Indirect costs have to be
apportioned to different products, if appropriate measurement techniques are not available. These may
involve some formula or base which may not be totally correct or exact.
4. Association with the Product
Cost can be classified as product costs and period costs.
Product Costs: Product costs are those which are traceable to the product and included in inventory values.
In a manufacturing concern it comprises the cost of direct materials, direct labour and manufacturing
overheads. Product cost is a full factory cost. Product costs are used for valuing inventories which are shown
in the balance sheet as asset till they are sold. The product cost of goods sold is transferred to the cost of
goods sold account.
Period Costs: Period costs are incurred on the basis of time such as rent, salaries, etc., include many
selling and administrative costs essential to keep the business running. Though they are necessary to
generate revenue, they are not associated with production, therefore, they cannot be assigned to a product.
They are charged to the period in which they are incurred and are treated as expenses.
Selling and administrative costs are treated as period costs for the following reasons:
(i) Most of these expenses are fixed in nature.
(ii) It is difficult to apportion these costs to products equitably.
10 EP-CMA
(iii) It is difficult to determine the relationship between such cost and the product.
(iv) The benefits accruing from these expenses cannot be easily established.
The net income of a concern is influenced both product and period costs. Product costs are included in
the cost of the product and do not affect income till the product is sold. Period costs are charged to the
period in which they are incurred.
5. By Changes in Activity or Volume
Costs can be classified as fixed, variable and semi-variable cost.
Fixed Costs: The Chartered Institute of Management Accountants, London, defines fixed cost as “ the cost
which is incurred for a period, and which, within certain output and turnover limits, tends to be unaffected by
fluctuations in the levels of activity (output or turnover)”.
These costs are incurred so that physical and human facilities necessary for business operations, can be
provided. These costs arise due to contractual obligations and management decisions. They arise with the
passage of time and not with production and are expressed in terms of time. Examples are rent, propertytaxes,
insurance, supervisors’ salaries etc.
It is wrong to say that fixed costs never change. These costs may vary depending on the circumstances. The
term fixed refer to non-variability related to the relevant range. Fixed cost can be classified into the following
categories for the purpose of analysis:
(a) Committed Costs: These costs are incurred to maintain certain facilities and cannot be quickly
eliminated. The management has little or no discretion in this cost, e.g., rent, insurance etc.
(b) Policy and Managed Costs: Policy costs are incurred for implementing particular management
policies such as executive development, housing, etc. Such costs are often discretionary. Managed
costs are incurred to ensure the operating existence of the company e.g., staff services.
(c) Discretionary Costs: These are not related to the operations and can be controlled the
management. These costs result from special policy decisions, new researches etc., and can be
eliminated or reduced to a desirable level at the discretion of the management.
(d) Step Costs: Such costs are constant for a given level of output and then increase a fixed
amount at a higher level of output. 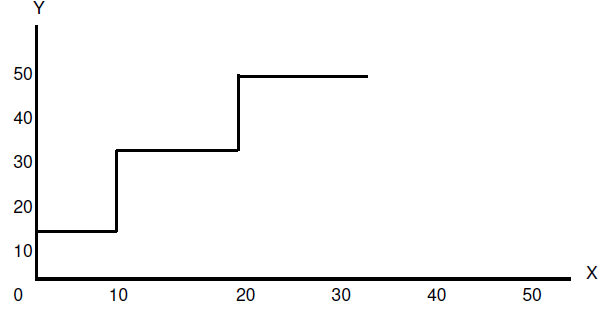 Variable Cost: Variable costs are those costs that vary directly and proportionately with the output e.g. direct
materials, direct labour. It should be kept in mind that the variable cost per unit is constant but the total cost
changes corresponding to the levels of output. It is always expressed in terms of units, not in terms of time.
Management decisions can influence the cost behaviour patterns. The concept of variability is relative. If the
conditions upon which variability was determined changes, the variability will have to be determined again.
Semi-fixed (Semi-Variable) costs: Such costs contain fixed and variable elements. Because of the variable
element, they fluctuate with volume and because of the fixed element; they do not change in direct
proportion to output. Semi-variable costs change in the same direction as that of the output but not in the
same proportion. Depreciation is an example; for two shifts working the total depreciation may be only 50%
more than that for single shift working. They may change with comparatively small changes in output but not
in the same proportion 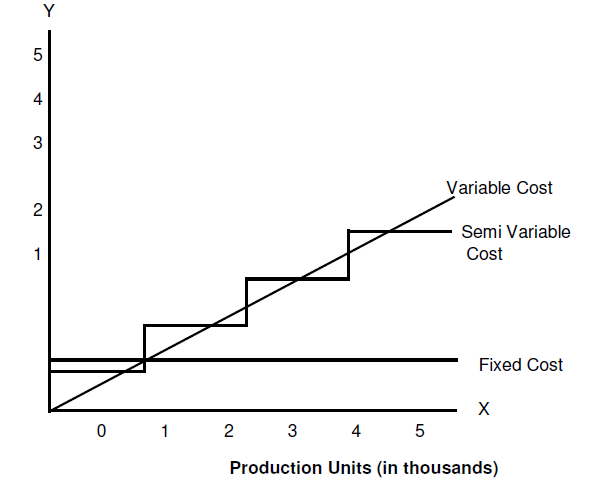 6. Functional Classification of Costs
A company performs a number of functions. Functional costs may be classified as follows:
(a) Manufacturing/production Costs: It is the cost of operating the manufacturing division of an undertaking. It includes the cost of direct materials, direct labour, direct expenses, packing (primary) cost and all overhead expenses relating to production.
(b) Administration Costs: They are indirect and covers all expenditure incurred in formulating the policy, directing the organisation and controlling the operation of a concern, which is not related to research, development, production, distribution or selling functions.
(c) Selling and Distribution Cost: Selling cost is the cost of seeking to create and stimulate demand e.g. advertisements, market research etc. Distribution cost is the expenditure incurred which begins with making the package produced available for dispatch and ends with making the reconditioned packages available for re-use e.g. warehousing, cartage etc. It includes expenditure incurred in transporting articles to central or local storage. Expenditure incurred in moving articles to and from
prospective customers as in the case of goods on sale or return basis is also distribution cost.
(d) Research and Development Costs: They include the cost of discovering new ideas, process,
products experiment and implementing such results on a commercial basis.
(e) Pre-production Cost: When a new factory is started or when a new product is introduced, certain
expenses are incurred. There are trial runs. Such costs are termed as pre-production costs and
treated as deferred revenue expenditure. They are charged to the cost of future production.

7. Relationships with Accounting Period
Costs can be capital and revenue.
Capital expenditure provides benefit to future period and is classified as an asset. On the other hand,
revenue expenditure benefits only the current period and is treated as an expense. As and when an asset is
written off, capital expenses to that extent becomes cost. Only when capital and revenue is properly
differentiated, the income of a particular period can be correctly determined. It is not possible to distinguish
between the two under all circumstances.