An audit note book is usually a bound book in which a large variety of matters observed during the course of audit are recorded. It is thus a part of the permanent record of the auditor available for reference later on, if required. The audit note book also provides a valuable help to the auditor in picking up the links of work when the concerned assistant is away or the work is stopped temporarily because in it are recorded along with observations, the various queries, explanations obtained and evidence seen, while queries remaining undisposed of would be noted for follow up. It is more satisfactory in some ways, however, to use loose sheets for entering queries and notes which, subsequently, on being punched, may be filed in a special query file maintained for each client or along with the clients’ accounts and papers, separately for each year.

Significant matters observed during the course of audit, a record of which should be kept in the Audit Note Book :

Specimen of entries in an Audit Note Book to indicate the manner in which entries in those books ought
to be made : 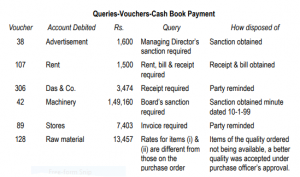 The making of intelligent enquiries on the accounts under audit is an important part of the work of an auditor. However, to guard against the client’s staff being required to provide explanation and information which are unnecessary or which could be ascertained otherwise junior members of the audit staff should be allowed to raise audit queries only after obtaining the prior approval of the senior incharge. Nonetheless, the enthusiasm of an intelligent and energetic junior should not go unrewarded  and, as such, the queries he wishes to raise and which are not pertinent or important should be discussed and explained to him.
The audit notes constitute important evidence of matters considered the auditor during the course of the audit, some of which may not find a place in his report submitted to the shareholders or directors, for the reason that on the basis of an explanation given to him the management, he, on being satisfied, decided to drop them. As such, audit notes can be an important defence for the auditor in the event of an action for negligence in the discharge of his duties being subsequently brought against him. In the past, these have been used for successfully defending a legal action brought against an auditor alleging negligence in performance of his duties. For instance in the case of City Equitable Fire Insurance Company Limited the auditor was greatly assisted in his defence the well maintained
record of work that had been carried out him in regard to the audit. The necessity of maintaining a systematic record of audit queries also was greatly emphasised Lord Justice Williams while delivering the judgment in the case of London and General Bank. Audit notes can also serve as a guide in framing audit programme in the future as they indicate the weaknesses in the system of the client which specially need to be watched. Also, it is desirable that the audit notes, whether they are kept in a book or in loose sheets, should bear a reference to the particular item of work in the audit programme, and as far as practicable, all notes relating to the particular work in the programme should be kept together in the systematic order.