Pupils who sat the 2019 Kenya Certificate of Primary Education (KCPE) examination will from Monday know the secondary schools they have been admitted to.

The first group will be those joining the 136 national schools and who scored 400 marks and above.

The selection started in Naivasha immediately after the release of the KCPE test results on November 18.

Education Cabinet Secretary George Magoha will release the names of those selected to join national schools.

“The ministry has developed watertight criteria to ensure the process is fair, objective, transparent and in keeping with meritocracy,” Prof Magoha said.

The regional selection will take place in 11 designated centres.

There were 103 national schools last year.

A majority of the students will join county and sub-county schools.

There are 35 special-needs education secondary schools with a capacity for 1,500 students, according to the ministry.

These schools have been upgraded to national status.

This year, some 2,407 candidates with special needs sat the exam, with the top scoring 414 marks out of a possible 500.

The team that has been meeting in Naivasha had to ensure selection to national schools reflects the face of Kenya.

The top five candidates of either gender from every sub-county will be placed in national schools on the basis of the choices they made where possible.

The ministry has the responsibility of ensuring equity in placement to national schools applying sub-county quotas based on candidate strength and affirmative action.

By design, affirmative action aims at guaranteeing the admission of minorities and marginalised groups to national schools.

In the Coast, it will be at Coast Girls High school and will cover Mombasa, Kilifi, Kwale, Tana River, Taita-Taveta and Lamu counties.

The team at Kakamega High School will cover Vihiga, Kakamega, Busia and Bungoma counties while selection for the Metropolitan region that covers Nairobi, Kiambu and Kajiado will be at Mang’u High School.

For the Central region covering Nyeri, Kirinyaga, Murang’a and Nyandarua counties, the selection will be at Nyeri Technical Institute.

For Machakos, Makueni and Kitui counties, the exercise will be at Machakos Boys High school.

The team at NEP Girls High School will cover Garissa, Wajir and Mandera counties, while selection for Meru, Embu, Tharaka-Nithi, Marsabit and Isiolo counties will be at Kaaga Girls School.

Prof Magoha said the government is determined to address challenges facing the 100 per cent transition.

To address congestion that has characterised schools, the government and partners under the Secondary Education Quality Improvement Project will roll out a Sh8 billion scheme to put up classrooms and laboratories in 110 sub-counties next year.

“This will ease the pressure on facilities in our secondary schools,” the minister said.

In the past, principals have converted dining halls and unused buildings to classrooms to accommodate the huge number of learners.

A report the Education ministry shows that there are 123,399 spaces in extra-county schools while 142,358 slots are available in county schools.

The scramble for elite schools has been high in the past. The government says it is determined to address the problem.

The Sh6 billion upgrading of 85 schools to national status has not eased the admission pressure on the 18 original institutions, a recent audit shows.

In a report tabled in the National Assembly, Auditor-General Edward Ouko said a review of Form One admissions showed that the original national schools are still grappling with congestion, indicating that parents have given the upgraded institutions a wide berth. 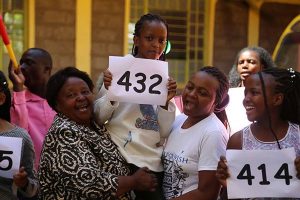